A crowd of hundreds, which included Congressmen from two states and a U.S. Senator, lined a small street in Independence to welcome a Wounded Warrior and his family into a new handicap accessible home. 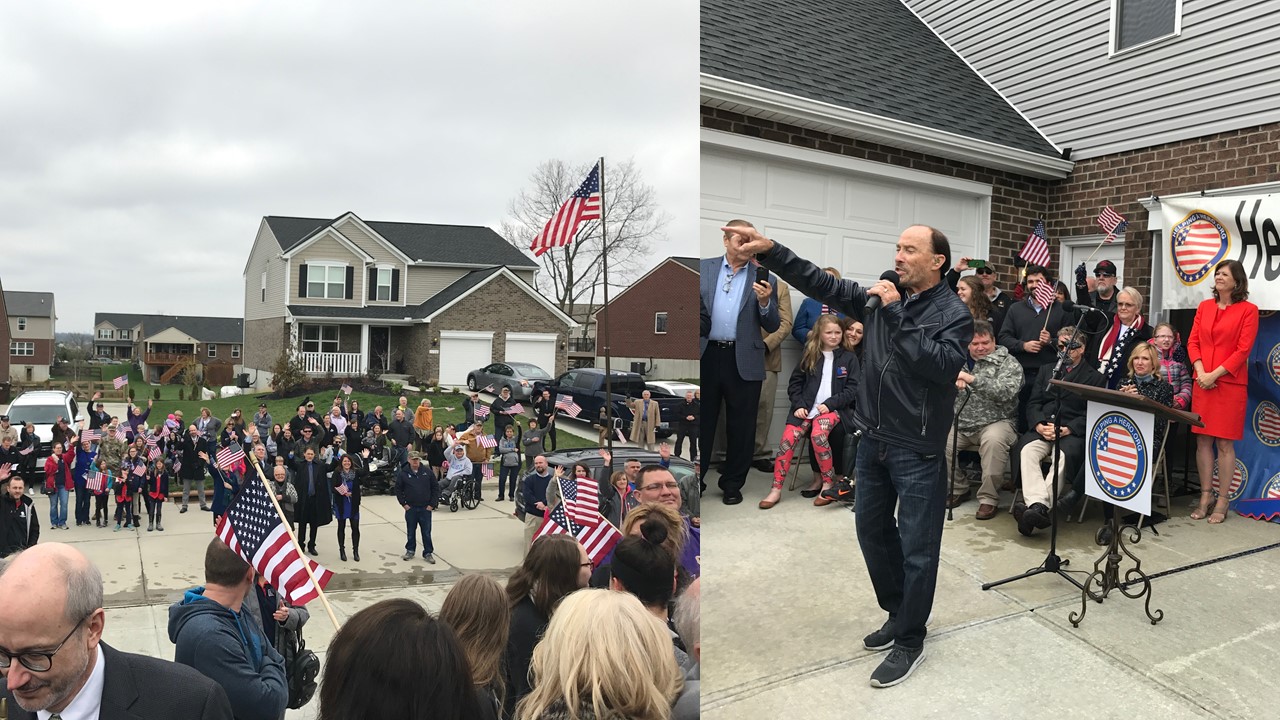 Country music singer Lee Greenwood points to those in attendance and the crowd reacts at the dedication of a new home for Staff Sgt. Paul Brondhaver and his family in Independence Monday (photos by Mark Hansel).

Helping a Hero, a national charity that has awarded over 100 homes in 22 states to severely wounded warriors injured in the Global War on Terror, presented the home to Staff Sgt. Paul Brondhaver (ret), who was injured in Iraq in 2004.

Meredith Iler, chairman emeritus of Helping a Hero kicked of the event by thanking those in attendance.

“This is a great Kentucky day,” Iler said. “We’re so glad that the weather cooperated and that all of you came out and are here today to welcome home the Brondhaver family.”

Brondhaver grew up in Ohio and joined the Army at age 17. He spent 21 years in the military and served in Honduras, Germany, Panama, Kuwait, and Iraq.

He served multiple tours in Iraq with the 216th Combat Engineer Unit and the 1st Infantry Division. In 2004, He was on combat patrol in Summara, just north of Baghdad when his unit was attacked with small arms fire and a rocket propelled grenade that exploded near his Humvee. 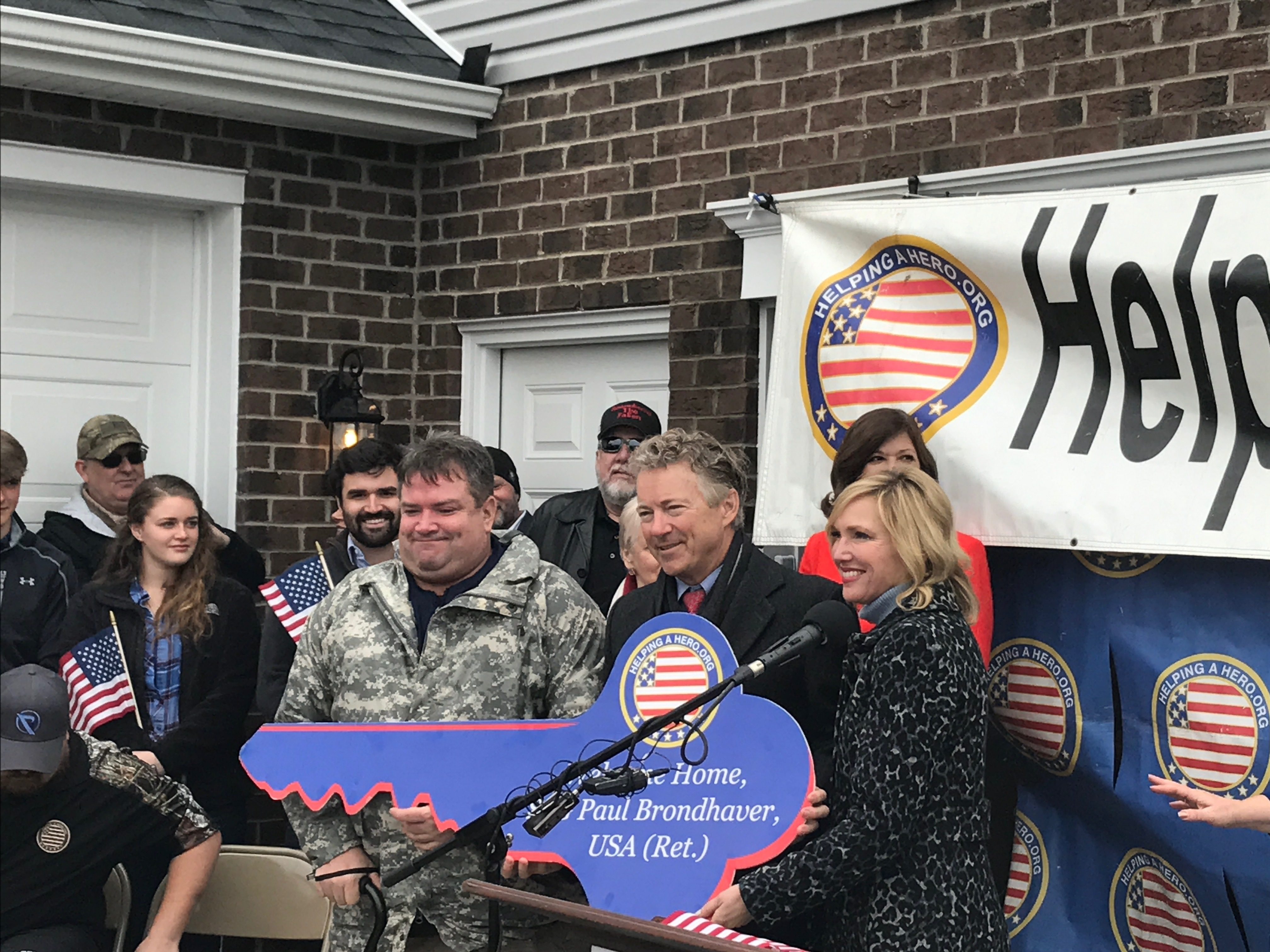 Brondhaver’s body was riddled with over 300 pieces of metal shrapnel in the attack. Brondhaver said one of the hardest things he experienced that day was watching a close friend and fellow soldier die in his arms.

Helping a Hero is a 501(c)(3) nonprofit, non-partisan organization providing support for military personnel, severely injured in the war on terror. Its principal activity is to provide specially adapted homes for qualifying service members as well as engaging the community to provide services and resources for wounded soldiers and their families.

Among those on hand to welcome Brondhaver was SGT JD Williams, USA (Ret.) a triple amputee from Bowling Green who moved into his Helping a Hero home in May 2013.

Invited guests included U.S. Rep. Thomas Massie, R-KY, and U.S. Rep. Brad Wenstrup, R-Ohio, a doctor who also served in Iraq and has assisted Brondhaver with the ups and downs of recovery from his injuries.

Independence Mayor Chris Reinersman also thanked the many invited guests, but saved his biggest welcome for the Wounded Warriors. 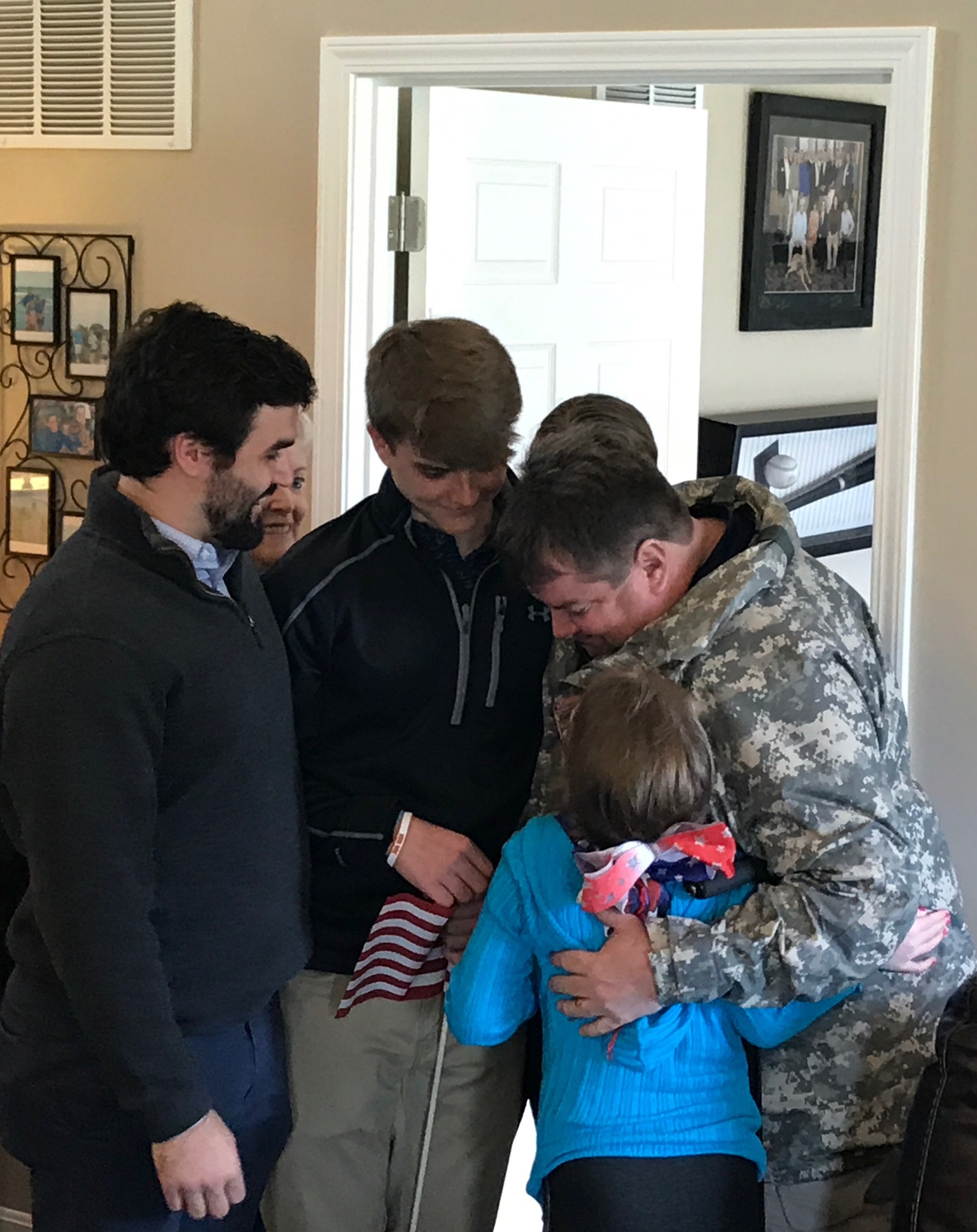 The Brondhaver family shares a hug a they enter their new home in Independence for the first time.

More than anything, we are so honored to have two American heroes here in Independence, Sgt. JD Williams…and our new neighbor, Staff Sgt. Paul Brondhaver, welcome to Independence,” Reinersman said.  “In Independence, we wear our patriotism on our sleeves; when Independence is your name, you try to live up to it…but it goes deeper than that. We appreciate the people who gave us our Independence.”

Sen. Rand Paul, R-KY, was also on hand to present the Brondhaver family with the key to their new home, but he let his wife, Kelley, do most of the talking.

Kelley Paul who serves on the Advisory Board of Helping a Hero and is the Kentucky Co-Chair, has been a tireless supporter of the U.S. military and its veterans.

She got involved when Iler contacted her to provide assistance for Sgt. Williams, a fellow Bowling Green resident, who sustained his injuries after stepping on an IED in Afghanistan.

“Looking back, I had no idea how blessed that I would become by working with this organization, getting to know Sgt. Williams and his wife Ashley, and so many other Wounded Warriors,” Kelley Paul said. “I’m just honored to be part of this effort.”

Country music star Lee Greenwood provided the music for the event with several songs, including “Wind Beneath my Wings,” and the tune that has become synonymous with his name, “God Bless the USA.”

During that song, restaurateur Jeff Ruby, also a strong supporter of the U.S. military, put a star-spangled jacket on Greenwood. The singer revealed that he had given the jacket to Ruby at a performance following the 911 attacks. 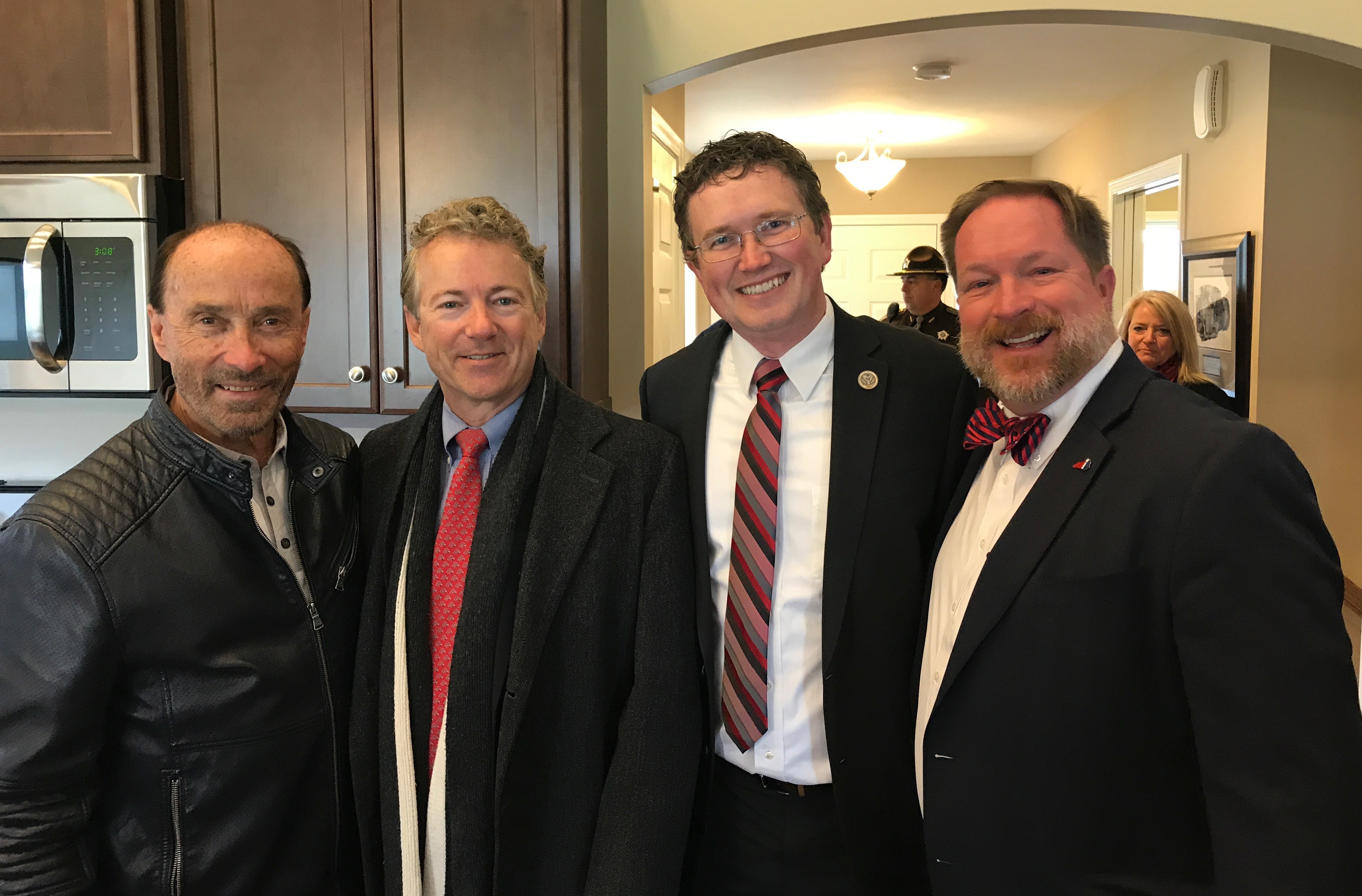 Brondhaver has often spoken at events but seemed overwhelmed by the outpouring of generosity on this day and could only manage a few words after entering his new home.

“This is so great,” he said, as he shared a group hug with his family.

Contributors to the project included Arlinghaus Builders, which constructed the home, Home Depot, which provided supplies and Hampton Inn, which provided a place for the Brondhavers to stay while construction was completed. Wiseway Supply provided the home’s lighting.

Brondhaver also received a check for $5,000 from the Coalition to Salute America’s Heroes, to help with expenses. The Coalition also partnered with Mills Fence Company to provide fencing for the property.

Food sponsors for the event included Chick-fil-A Fort Wright and LaRosa’s which will also provide the family with free pizza for a year.

Many of the guests also brought gift cards which were added to a community basket to help the family with the transition to its new home.

To the brave men and women who sacrifice so much for our freedom, we salute you.